Part III - The Innocence of Muslims 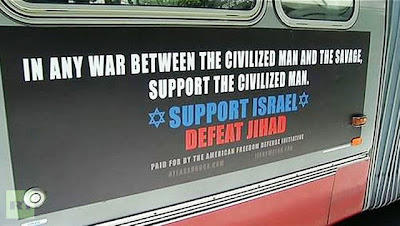 Am picking up where I left off…

Behind every White Man there’s an indigenous « Savage ».

White man, white woman --- this is not about skin color. And am tired of having to explain every word I use.

The indigenous  savage as a construct, by the white man. Am sure the Natives of the Americas and those of Africa  will understand me.  On the other hand am not sure who makes me more  angry – the White Man or his Uncle toms, because Uncle Toms abound.

Rub in 9/11 whichever way you turn your head --- the savages are out, rioting, protesting and getting killed by their own Uncle Toms, to the choir of Muslim Scholars from across the Atlantic. Follow the example of the Prophet -- they patronize, from behind their altars /minbars (not minibars) and the cozy safety of their computers ---all afforded by “Free Speech”.

They may have a point – we are not Pavlov’s dogs to react to every injury -- we are just “savages” - lambs for slaughter.

A great disconnect between two realities and a widening gap – East and West. Those on the other side don’t see, don’t feel, don’t want to know. They cry Islamophobia, worry if someone touches their niqab or veil but ignore the voices coming from the other side…the savages on the other side are truly uncivilized , not like us, us living with the White Man and striving oh so much to be accepted by him (and her, of course.)

They are a minority we are told. All Salafists, Jihadists, extremists.  Ban them.

France banned the protests and closed its embassies and schools in 20 countries. It even sent 60 policemen for one lone protester. Indeed we need to protect ourselves from the Savages.

Any speech if not for Israel, is considered anti-semitic in la République, criminalized by law.  But please do have a go at the Savages because we are a nation of Freedom . And French courts were quick to ban topless pictures of the English royal family. A symbolic gesture of solidarity with “Decency” against the “Grotesque."  Noblesse oblige. While in England, courts sentenced a young UK citizen  of Asian descent, Ahmed Azher -- for cursing British troops in Afghanistan, on his Facebook page.

Only when Savages protest, do things go violent.

When the Chinese stormed the Japanese embassy and burned Japanese shops across China, they were just angry protests. When 4000 Dutch teenagers pelted  Dutch police with stones, hammers, and bicycles following a Facebook Birthday party invitation ---which your lousy teenagers call the X project ( X projects have caused much damages to properties in Europe and US), they are just protesting. And what of yesterday’s rally of the Aryan March in the US protected by US police ? These can’t be savages, they are Aryan.

We are innocent – the white man in total outrage exclaims - wagging his finger against the violence of Savages. We had nothing to do with the film.  You don’t understand, because you are savages, but we live in Freedom…why can’t you learn from us. Hell we have been trying to teach you, since the fall of the Ottoman Empire. We the Brits, we the French, we the Germans, we the Dutch, we the Italians, we …we…Did we not colonize you to civilize you ? Did we not spend time and effort to teach you the glory of our race, of our concepts, of our lifestyle, of our way of being…Hell we did…Hell we sure did.

And look at you, just look at you – devoid of “Reason and Responsibility”  (another title from the Guardian), enraged like rabid dogs, rioting, burning flags, tires, and getting killed like Savages.

Here, have a drone, here another one…

Did you not learn your lesson in Iraq? Here take a B.52, a good dose of Depleted Uranium, cluster bombs and some White phosphorus as white as us…

Still not learning are you? Here have Guantanamo, here take Abu Ghraib, there you go, Bagram is waiting for you…we get to keep your body parts as trophies, though…after we sodomize the God, your Allah out of you. Hell…we try so hard with these savages…

You don’t understand said one of the film backers --- this is to weed out all the Binladens out there.  BinLaden is dead,  what are we going to replace him with ? How about Jihadist /Salafist ? Sounds exotic in a nasty kind of way…perfect term -- foreign and nasty --even more potent than the sound of Al Qaeda – because Jihadists/Salafists are everywhere…no longer hidden in the caves of Tora Bora but everywhere even on New York Subway Stations.

Remember it was the Islamists before, they were called insurgents, militants, terrorists…now that we have seriously warmed up to them in Tunisia, Libya, Egypt and Iraq (of the Shiite type) and hopefully soon in Syria (a protest about to be hijacked) now that we “contained” the Islamists and their “intellectuals” (will not name names, you know who you are), we still need to weed out ….weed out the “violent “ elements… yes those savages Jihadists/Salafist.

We need a peaceful Muslim…here, have another drone.

Anyone who stands against us is a Salafist/Jihadist/ Savage. Soon we will go to the root of the problem….the Mother of all Salafist of all Jihadists ---- that country, we know who you are.

Islamists now cracking down on Salafists/Jihadists…yes they are literalists and myopic but so were you before you were "contained" by the White man.

But all those who took out to the streets were not literalist myopic extremist savages, they are simply FED UP with you White Man. And anyone who is fed up with you is considered to be against you.

Violence is ugly…am well placed to know. I witnessed the violence of the White Man in Iraq. It is a savage violence…

Yes, violence is heinous, drones who killed this little boy’s entire family, knows how heinous it...

Yes violence is ugly…hideous… Afghan women are well placed to know when a strike killed 8 of them while they were gathering wood just 48 hours after your Ambassador and his aides died… and the reaction on Twitter was indifferent, at best lukewarm. Who gives a damn - more Afghan women and girls getting killed --- surely not the global feminist movement who is now urging us to protest naked, nor our house Muslims with their veils and nasal twangs.

Yes violence…I know it…I wake up drenched in sweat, this morning was no exception…I saw myself in Baghdad, terrorized Baghdad in tatters….scared, scarred, pleading with the sacred, running like a fugitive, like a savage…crossing a street not knowing when an explosion will take me…I stumble in my savage race for life…and fall…on a colony of black dead roaches, lying on their backs.