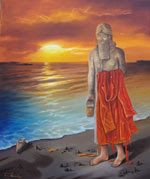 Now that "Eye Raq" is a bloody mess , a stinkhole of anonymous cadavers, The Geniuses in the White House are calling on "Eye Ran " to help them fix it .
So Mr. "Death Squad" also known as Al Hakim,dusted off his robe , re-arranged his turban and pumped himself up like a peacock to be received in private by none other than the President of the USA.
Some of those on the "Left" acclaimed another victory for the "Anti Imperialist forces" so bravely at work in Iraq. In their limited understanding of political power plays, "EyeRan" aka Persia is viewed as the Savior from the grips of ugly Imperialism and its racist bed partner Zionism.
How can people be so politically naive is beyond me .
Do they really think that when the Zionists in D.C - who also happen to be "advisors" for Israel - did not figure it out that :
- "EyeRan" has been arming and funding rebellious Shi'a groups since the 1980's
- That by the time the Americans arrived in "EyeRaq" , those "Eyeranian" backed Shia groups will be more than pleased .
- That delegations of "respectable Eyeraqi" opposition like Chalabi, Makiya, Allawi, Hakim, Jaafari ... (and the list of sectarian traitors is way too long ) landed in Washington DC to finalize their "Liberation" program.
- That when the Americans decided to divide "EyeRaq" along ethnic lines - a mish mash of warped definitions since : Kurds are a majority Sunnis, Shia's and Sunnis belong to the same Religion and that ethnicity is not defined by religious adherence - they were actually fomenting and aiming at the current sectarianism that is taking place today ?!?
And did anyone think of the Chaldeans , the Assyrians or the rest ...?

And when Bush and the Great Cyrus of Persia affirm that the current "EyeRaqi" goverment is a democratically elected one even though the country is under occupation and mayhem, this leads me to question , and question big .

So Al Hakim and his goons from "EyeRan" are only the natural logical conclusion for the American Zionist plan . Let me rephrase it , they are the natural extended arm of America's "Operation Freedom".

"EyeRan " is most pleased with the fruits of its labor , it will be getting a good chunk of the war spoils . Khomeini's dream has finally come true .
The "Liberation of Jerusalem " will take place through Nejef and Kerbala , he said .
Except that the great Ayatollah forgot to mention that his Jerusalem was nothing but Baghdad and not an inch beyond .
And I don't care about the current political rhetoric coming from Teheran vis a vis the Palestinian cause, when I know that Palestinians in "EyeRaq" are being finished off by the very same proponents for Palestinian rights.

Let the " Anti Imperialists" rejoice at the victory of the "Eyeranian"sectarian Mullahs now, whilst the "Eyeraqis" are being quietly eliminated at the rate of 400 a day with the blessings of the not so great U.S of A.

Abraham was from Kufa after all , and Abraham is back , except this time , it is the Eyeraqis who are on the "Biblical" Altar waiting for their execution . In fact the "Eyeraqis" have become the sacrificial lamb of the Old Testament .
Israel is blessing this celestial gift of yet another golden calf . (If you don't believe me , ask the valiant Kurdish Peshmergas) . And the EyeRanians (Persians) are most pleased with Mani their ever living prophet of Manicheanism , or was it Machiavelli ?

An Eye for an Eye and the World has definitely gone blind .
And Mesopotamia stands alone naked with nothing but a robe made of blood .

datta said…
Interesting and informative analysis Layla. I always learn alot from you and thanks for all the great links from uruknet.
What a bunch of machiavellian jackals are they that run the world!
EEEEEEEEEEEEUUUUUUUUUUUUHHHHHHH!!!
4:13 AM

I can never understand the situation my Iraqi brothers and sisters are experiencing, the only thing we can do is make du'a to Allah (swt) to help you in this inhumane conditions.

I have always agreed with your posts, but cannot on this particular one. This is one the problems with Iraq at the moment, the secterian violence, and it is not going to end when the Sunni's point the finger at The Shia's and vice-versa. We may never agree on our religious and ideological beliefs, but we can agree that America and the 'Coalition of the Willing' is the enemy. By saying the Shia death squads are the problem does nothing, rather than further alienate each other and makes "unity" nothing but a distant dream. There are Shia death squads, and there are Sunni militiamen also killing innocent Iraqi's, all supported by the Zionist Americans. If ALL Iraqi's can see this, band together and rip the real motherfuckers apart i.e the Americans, God Willing, there may be a chance for Iraq after all.

Then again, what does one expect on the land that the great Imam Hussein (as) was martyred on, it was cursed from the beginning.

May Allah (swt) be with you always. You, and all the other faceless, and voiceless Iraqi brothers, sisters, children, and elders are in my herats and dua's.
9:25 AM