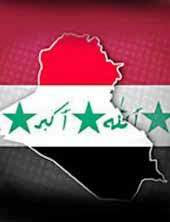 This short (I hope) post is prompted by a comment someone made in response to an article I wrote regarding the heinous criminal murder of Neda Agha Soltan, one of the many victims of the fascist government of Tehran.

In that comment, this Palestinian "activist and poetess" heavily reprimanded the website that published this post of mine, by telling them how can they allow such an article --and that Arab nationalism is a disease. For this Palestinian,  Arab nationalism is a disease because in that article --  I said clearly that the word ARAB has been erased from the Iraqi constitution, and that this occupation, this DUAL American - Iranian occupation's objective (or one of its objectives) is precisely to eradicate the ARAB identity of Iraq.

This Palestinian saw this as not only a sick ideology but also as an insult to her idol fascist government of the mullahs of Tehran.

So I am going to take this as a starting point for today's post.

But before doing so, I need to express my disgust at this woman's comment, precisely because it is coming from a Palestinian. I would have assumed that after 60 years of a brutal occupation by Zionist Jews, for the most part of Aryan descent, this Palestinian woman would be more aware than anyone else, of the continuous attempts of the Jewish entity in eradicating not just her Muslim Identity but first and foremost her Arab identity. The Jews always refer to the Palestinians as ARABS, not as Muslims, not as Christians, but as ARABS. But maybe Ms.Palestine has forgotten all about her own roots by now...

Furthermore, if she has made her comment out of "Islamic" solidarity with the fascist government of Iran, then I need to remind our "good Muslim" Palestinian, that Islam was handed down in ARABIC and that ARABIC is the language of the Koran.

Therefore, it is practically impossible, to divorce/separate the concept of ARAB from Islam since the linguistic basis is one and the same. And since it is through Islam- that she seems to hold onto so dearly - i.e through the ARABIC language, that the Islamic message was revealed and Islam was propagated to the 4 corners of the world.

That is not to say that every Muslim is an Arab. Not at all. But it is to say that every Muslim who wants to really learn his Deen, his religion is forced by hook or by crook to recite even if he/she does not understand one word, to recite the verses of the Holy book in ARABIC. And this is no coincidence because God (if one is a believer) does not  make mistakes. This Palestinian Muslim commenter should know that better than me.

And that is not to say that ARABS are a superior race, because being an Arab is not simply a racial definition but also a linguistic one. Meaning that the WORD as revealed by Allah was in Arabic and this is what formed the first foundation of what you can call the Arabic - Muslim culture/civilization.

And that is not to say that every person who speaks ARABIC is an Arab, but it does say that every person who is affiliated to this part of the world, the Arab world, regardless of his religion, is tied to this area by language, culture and the rest...and that this tie is part and parcel of his/her identity whether she/he likes it or not...and however much he/she denies it or tries to supersede it with supra ideological precepts, juxtaposing  on top of this basic core identity, other political ideologies including a  pan Islamic ideology such as the concept of the Islamic Ummah (an Ummah regardless of race, ethnicity, language etc...)

Which again is not to say that Arab Muslims are better than the rest of the Muslims worldwide, but it is to say that ARABIC is an integral part of Islam and cannot be separated from it. And that is a FACT not some wishful thinking. Hold the Koran, open it and see in which LANGUAGE it was revealed.

Hence, by logical deduction and a bit of common sense, which unfortunately this Palestinian commenter seemed to be grossly lacking, it is clear that what constitutes the basis of an ARAB identity is not some sectarian affinity or some racial classification, but what constitutes the basis of ARAB identity and by correlation Arab nationalism is a common language.  And by LANGUAGE I am not talking about the comprehension of words alone. Take LANGUAGE in the widest sense possible.

And as I tried to show earlier on -- the Arab culture (in the largest sense of the word) cannot be divorced from Islam because of the language ties, so what constitutes Arab Nationalism is just that - a common LANGUAGE ( religion plus culture plus history plus traditions...) as opposed to simply a common race. And it is a LANGUAGE that happens to be born and take root in this part of the world that we call the ARAB world.

And frankly I don't understand why the allergy to the concept of Arab nationalism. Arab nationalism and by correlation and extension --Arab Unity, should be a NATURAL outcome out of our common ties as a people who share for the most part the same religion, the same language, more or less the same culture, a common history, and the same enemies.

But Ms Palestine must have forgotten that too, just as she had conveniently chosen to forget that her beloved Iran of Khameini, and his sectarian death militias in Iraq murdered her Palestinian brethren bringing down their population from over 35'000 to less than 7'000 in the course of 3 years alone. And Ms.Palestine also conveniently forgot that her brethren - the Palestinian refugees from Iraq lingered in a no man's land between Iraq and Syria, in the desert for 4 years now. And only 1 week ago, was the last batch re-settled in some Northern country. I suppose for Ms. Palestine this is a show of Islamic solidarity from Iran to the Palestinian cause.

But let us leave this limited woman and what she thinks aside. Let me stick to the subject matter, but I still need to thank her for having inspired me with her most enlightening comment.

Take the E.U as an example . For the idiots of America, E.U stands for European Community.

Take each member sate of the E.U -- NONE of them speak a common language. NONE. (French, English, Gaelic, Russian, Swedish, German, Danish, Portuguese, Greek, Spanish, Italian, etc...) where is their commonality in terms of linguistic/culture ?

What common history do they share, apart from being at each other's throat from even before the 1st world war and throughout the 2 nd world war, during their heydays of colonialism and plunder where they would literally eat one another up for a piece of land in India, Africa, Asia, Latin America, Middle East...

Yet the E.U found that it is their best interests to group as EUROPEANS, and maybe there is a racial element to that, since most Europeans are considered Aryans or Caucasians, even though am not sure Latins and Greeks would fall into that categorization. I am assuming they do.

Yet the E.U found that it is in their best interests to group as EUROPEANS because they shared somewhat a similar culture and a similar religion - Christianity.

So the  E.U managed,  despite years of cut throat competition and small empire building, to produce a COMMON identity, as represented by a document called the EUROPEAN Passport. A common currency, as in the EURO, common political councils, groups and parliament, common economic ties, common "cultural" missions--etc...in short the Europeans managed to CREATE a common Identity whilst still retaining their own national one.

Is that not European Nationalism ? Of course it is.

So why the allergy to the concept of ARAB nationalism when we as a people have much more in common with another than the Europeans have. We speak the same language for God's sake.

I can go to any part of the Arab world, can listen to any piece of music from any country of the Arab world, can watch any film, can talk to anyone ---  from Morrocco, to Mauritania, to Lybia, to Egypt, to Saudi Arabia, to the UAE, to Iraq, to Jordan, to Syria, to Ze Lebanon, to Palestine... and I UNDERSTAND the LANGUAGE. Language not just as in words but LANGUAGE as in reference to concepts, to ideas, to feelings, to culture, to tradition, to religion, to history...etc...

So I ask again what is wrong with Arab Nationalism and Arab Unity ?

And why should I, as an Arab accept any so called " Muslim" country erase my Identity ? When it is my language that gave birth to their "Islam" as in the case of Iran  (and even Turkey)

So if my wanting to preserve my language, my roots, my identity, my culture, my history, my religion, and my sense of belonging to this land, makes me a  "sectarian, nationalist " then so be it. I am a sectarian nationalist.

But then one should ask Ms. Palestine, if her fighting for her language, roots, identity, culture, land and history and sense of belonging does not make her one too.